I have now been going to the gym (12Rnds Fitness) for a little over 1 year… (and have posted previously about my exercise obsession “passion”). I have been using a Myzone Heart Rate Monitor for nearly 6 months and (remarkably) for the last few months have been “topping” the Myzone Table for our local Gym, and am (for now) even Top 10 nationally (currently #2) across more than 2,600 participants. 🙂

However, I have recently started to notice some oddities in our local gym results…. some members have, all of a sudden, started getting amazing Myzone (MEP) scores for their workouts… which seemed odd. Some of the national figures also seemed a bit iffy (with some members getting scary big MEP scores consistently, day in, day out).

Myzone is a heart rate monitoring system used by many fitness clubs that uses wireless and cloud technology to monitor physical activity.

It involves members wearing a heart rate monitor (on an elasticised strap around the chest) during their exercise sessions. It can be worn in the gym, (tracked by a monitoring device in the gym), or externally (either recorded on the device itself or tracked via a smart phone).

The device records heart rate over time, and the Myzone system generates a LIVE view of your heart rate on a gym-based monitor (as a color-coded, easy-to-read “tile”) as well as recording it against your account.

How does Myzone Work

When you purchase a Myzone device and create an account, your Maximum Heart Rate (MHR) is automatically determined (based on your age)… The MHR represents a heart rate that is considered to be the Maximum Heart rate you should be able to (safely) achieve with exercise. The MHR is used as the basis for the calculation of MEPs.

MEPs is an acronym for MYZONE Effort Points, and it’s the metric by which everything is measured in the myzone system. MEPs are earned by exercising in your target heart rate zones over a period of time. The more effort you put into each of your workouts, the more MEPs you earn!

There are 5 different Heart Rate Zones (based on your heart rate as a percentage of your MHR)… and each zone contributes a certain amount to your total MEP score.

Under normal circumstances, if you start to regularly hit 100%, then your MHR is automatically adjusted UP by the Myzone system. However, it is possible to also CAP an MHR so it does not increase above a specified level (although I am unsure under which circumstances this is set).

You are unable to adjust your own MHR, but your Gym owner, or Myzone support can do it.

Myzone can be a great Motivator

One of the primary goals of Myzone is to encourage you to pay attention to your workouts – with the aim of motivating you to work a bit harder… or a bit smarter… to achieve your fitness goals…. and it can do this VERY effectively…

It’s amazing how often you find yourself pushing a little harder to reach a different level… or training a little longer to get to a particular MEP or Calorie target… or finding that extra energy to push you to achieve your MEP goals.

The leaderboard can also be a great motivator…

If you are getting good MEP scores, or doing well in the leaderboard, or seeing your fitness levels increase with the extra effort you’ve been putting in, Myzone can be a fantastic motivator….. but… when things aren’t going “right”, Myzone can also be a powerful de-motivator…

Myzone can be a great De-motivator

I have noticed some members training REALLY hard but still struggling to reach RED or sometimes even YELLOW Heart Rate zones… but other members seem to be able to achieve very high scores (even hitting 100% for most of their workout) with seemingly relatively little effort.

I realised that it was pretty simple to “reverse engineer” the Maximum Heart Rate and Zone (%) readings on an individuals Myzone tile… and pretty accurately determine their MHR and “Excercise Age” (I plan to do another more technical post with more information about this).

I was stunned to discover that some people (often hitting 100% multiple times within a single session) had a MHR of just 160 or less (an effective “Age” of 80 years old)… and one even had a MHR of 120 (an exercise Age of 142)… This would have been very impressive if they actually were that old… but I really don’t think they were.

I also realised that for some, their MHR did not seem to be changing over time (as it should – to reflect regularly reaching 100% effort). The average person would only be getting a BLUE or GREEN level for that type of HR.. These people seem to have their MHR Capped…so were getting significantly higher MEPS for each workout – and an unfair advantage for the Leaderboard.

These people are often quite motivated (and are sometimes training pretty hard) because they are seeing great Myzone scores… but their scores are a great de-motivator to everyone else who simply can’t compete because of the unfair advantage.

I would like to see the MHR Cap removed for these people (unless there is a specific medical reason) and their MHR reset to more closely relate to their actual age… then let the Myzone system do its thing and adjust accordingly.

I had also noticed some people training hard who really struggle to get into the red zone (if they can get there at all). These people mostly seem to have reasonably accurate MHR and Age levels (i.e. close to their actual age), but they find it VERY difficult to get decent MEP scores and almost impossible to show up on the top 20 leaderboard ..despite the effort they put in… This is pretty de-motivating for most of them.. there is little added incentive to work harder.

I would like to see the MHR of these people adjusted down to a level where they are consistently able to reach the red zone (at least once per session).

I also noticed that a few people in the Leaderboard had VERY HIGH MHRs (some as high as 200 – an effective training Age of just 17). These people, through training VERY hard, are still able to achieve decent HR levels and good MEP scores. There MHR has most likely been automatically adjusted up over time by the Myzone system.

As far as I am concerned, these are the real heroes of the gym and although they are clearly motivated… probably deserve more recognition.

As a lowly gym junky, I clearly have no actual say in how this works… but as far as I am concerned Myzone and the gyms should be doing whatever they can to “level the playing field” so that as much as possible everyone has the same chance to get decent MEPs. I would suggest : 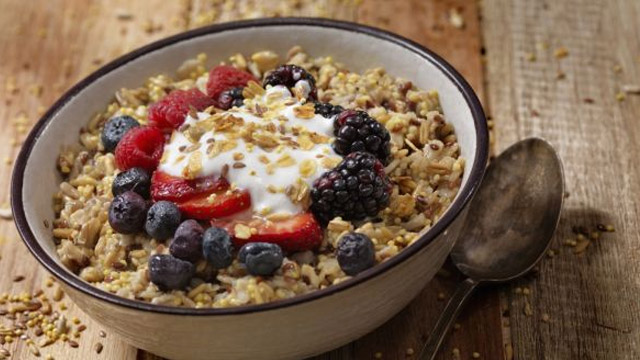 O.M.G… What a Difference a Bowl of Muesli Makes !!!

You might assume from the title that this post is about food… You’d only be partially correct, as it is mostly about Exercise – and a bit about Nutrition…

I’ve been going to the gym (see Why I Love 12rnd Fitness) for almost a year now… and for the most part do morning workouts… usually before I have had anything to eat or drink… This has been going pretty well, but recently I have started to do a few more (extra) Lunchtime and Evening sessions.

This mornings session in particular was tough. I found it difficult to raise my heart rate into yellow (80-90%) on my Myzone Heart Rate Monitor, and only managed an hour and 145 MEPS – my “worst” session for months….. (see workout graph below) :

I have been pushing it pretty hard at the moment because of a Myzone 6 Week Challenge (shockingly, I am currently ranked #1 in Australia – out of more than 2,500 12Rounders)… and I did 10 sessions last week, and a double session yesterday, so it is probably not surprising that I am feeling a bit “flat”… However, I wondered if maybe food was a part of the issue, so decided to go home … have something to eat… and try again at lunchtime…

After a Bowl of Muesli..

So.. I went home, had a bowl of Bircher Muesli (and a couple of pots of tea), did a couple of hours work (sitting in front of the computer)… and went back to 12rnds for a Lunchtime training session.

The Lunchtime session felt SO much better…I was almost immediately (in my warmup) able to get into the yellow zone (80-90%) and managed to sustain it (or higher) for most of the workout – giving me a 270 MEP, 80+ minute workout. 🙂

The above should probably not have come as a great surprise to me, but I had not really thought about it much before…Apparently if you work out first thing in the morning before eating breakfast (what’s known as a fasted cardio state) it is believed to help with weight loss. However, working out after eating may give you more energy and improve your performance.

Looks like I need to do some more research (watch this space)… but in the interim, I think I will start having a small meal/snack at least 1/2hr before my workout… and see how it goes.