Day of Surgery – The Operation 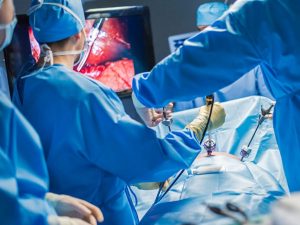 By now my Operation should be underway (or about to start)….

I will be suitably impressed by how many there are on the surgical team and all the fancy medical equipment (especially the machine that goes “bing”).

Wheeled into the operating theatre at 12:00 (an hour behind schedule)… Transferred to   surgical bed (which was not as comfy as my other bed – but I guess who cares when I am out cold :))

Operating theatre very impressive – lots of important looking machines (no “binging” though).  There were a few nurses around but everyone wearing masks so I don’t know who was who.  Can’t really remember anything about this so I must have been knocked out pretty quick – didn’t even get a countdown (that I recall).

Update: – It took a while, but I have finally got my hands on a “highlights” vidoe of the actual procedure.. See: Mini Gastric Bypass Surgery – The Video – for more information but here is the video :

Next thing I knew I was in the recovery room, but here is what I learnt afterwards….

When the surgeon “got in” he discovered that my liver was much more scarred than we expected (we were already aware there was some scarring – and potential cirrhosis of the Liver because of early testing).  Scarring causes the liver to become less pliable – making it harder to “work around” during the operation and also potentially significantly increasing the risk of bleeding during surgery.

This was apparently a touch and go moment – deciding on whether or not to proceed with the operation…. But because the surgery was clearly the best option for my Diabetes and Weight Loss, and likely the best long term option for my liver as well, the surgeon decided to go ahead… I am SO glad that he did, because if he stopped at this stage, it is unlikely that bariatric surgery would be a real option for me again.  He took a biopsy of the liver and I guess we will see what (if anything) needs to happen with regard to Cirrhosis further down the track 🙂

Everything else (apparently) went extremely well and an hour or so after arriving in the op theatre I woke up in the Recovery Room.

Note: I hope to add some extra photos here of my actual operation… Everyone (except the surgeon) seemed a bit nervous talking about photos, but he apparently took a whole lot (including some “gruesome”) ones which I hope to get hold of and include here 🙂